New information and updates will be added here,
on the ‘News’ page of the Cathedral website.

​A downloadable version of the newsletter is available by clicking on the icon below.

Jesus said to his disciples:
‘Watch yourselves, or your hearts will be coarsened with debauchery and drunkenness and the cares of life, and that day will be sprung on you suddenly, like a trap. For it will come down on every living man on the face of the earth. Stay awake, praying at all times for the strength to survive all that is going to happen, and to stand with confidence before the Son of Man.’

Every Mass is a public official act, even though it might be offered without elaborate ceremonial. Strictly speaking, a “private Mass” in the sense of a private affair is impossible. The entire Church together offers the sacrifice with and through the priest.

Mass Intentions for other days can be requested either by sending an email to mary.manners@cliftondiocese.com or ring 0117 973 8411 Monday-Friday 9am-1pm. Please note that Cathedral House continues to be closed.

A number of parishioners have asked how they can continue to support the Cathedral financially whilst unable to attend Mass. The donation ‘button’ that has been added to the homepage of this website enables donations to be made using credit and debit cards and via PayPal. Cheques can be posted to: Clifton Cathedral House, Clifton Park, BS8 3BX. Any parishioners wishing to set up a standing order or make a payment directly to Clifton Cathedral are asked to e-mail mary.manners@cliftondiocese.com 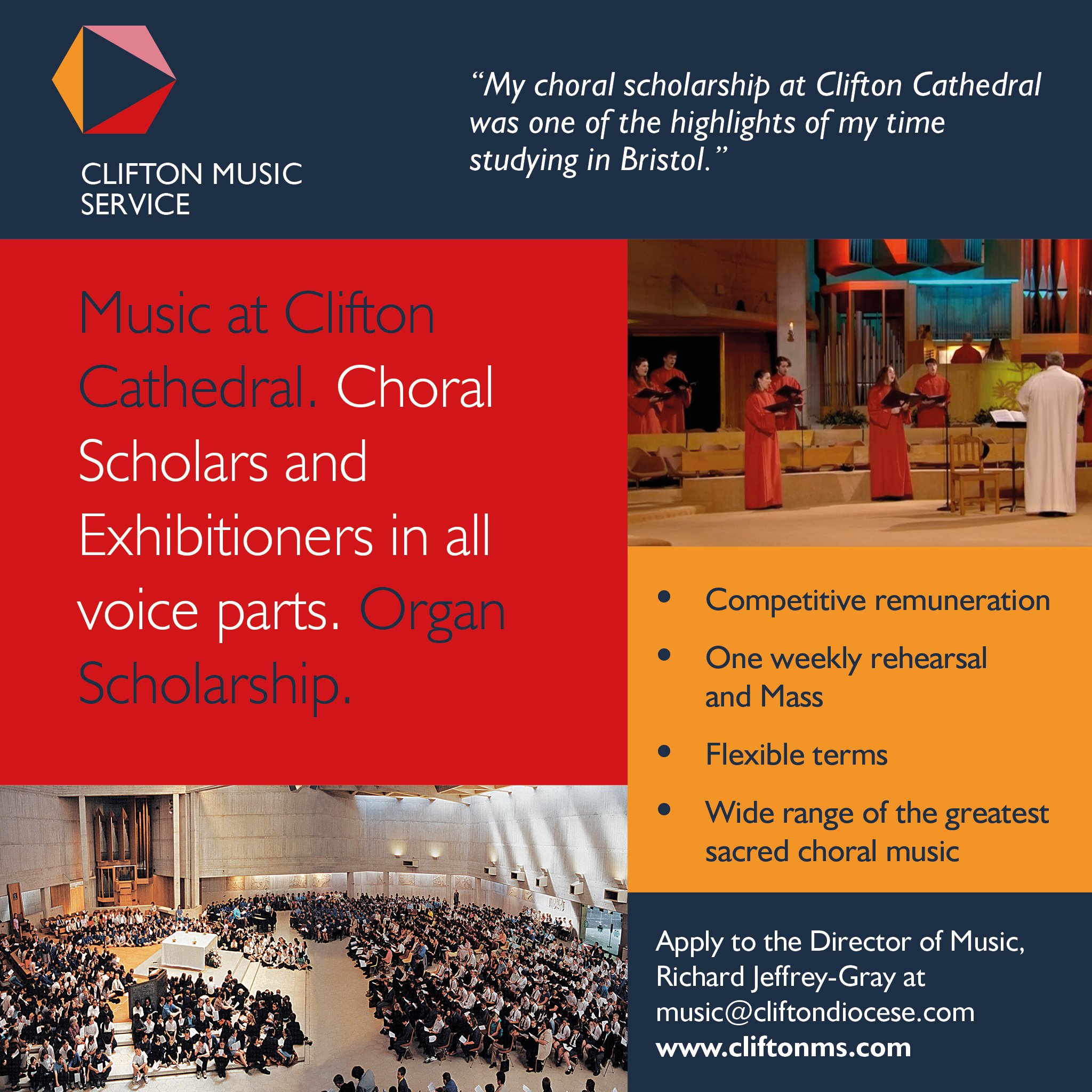 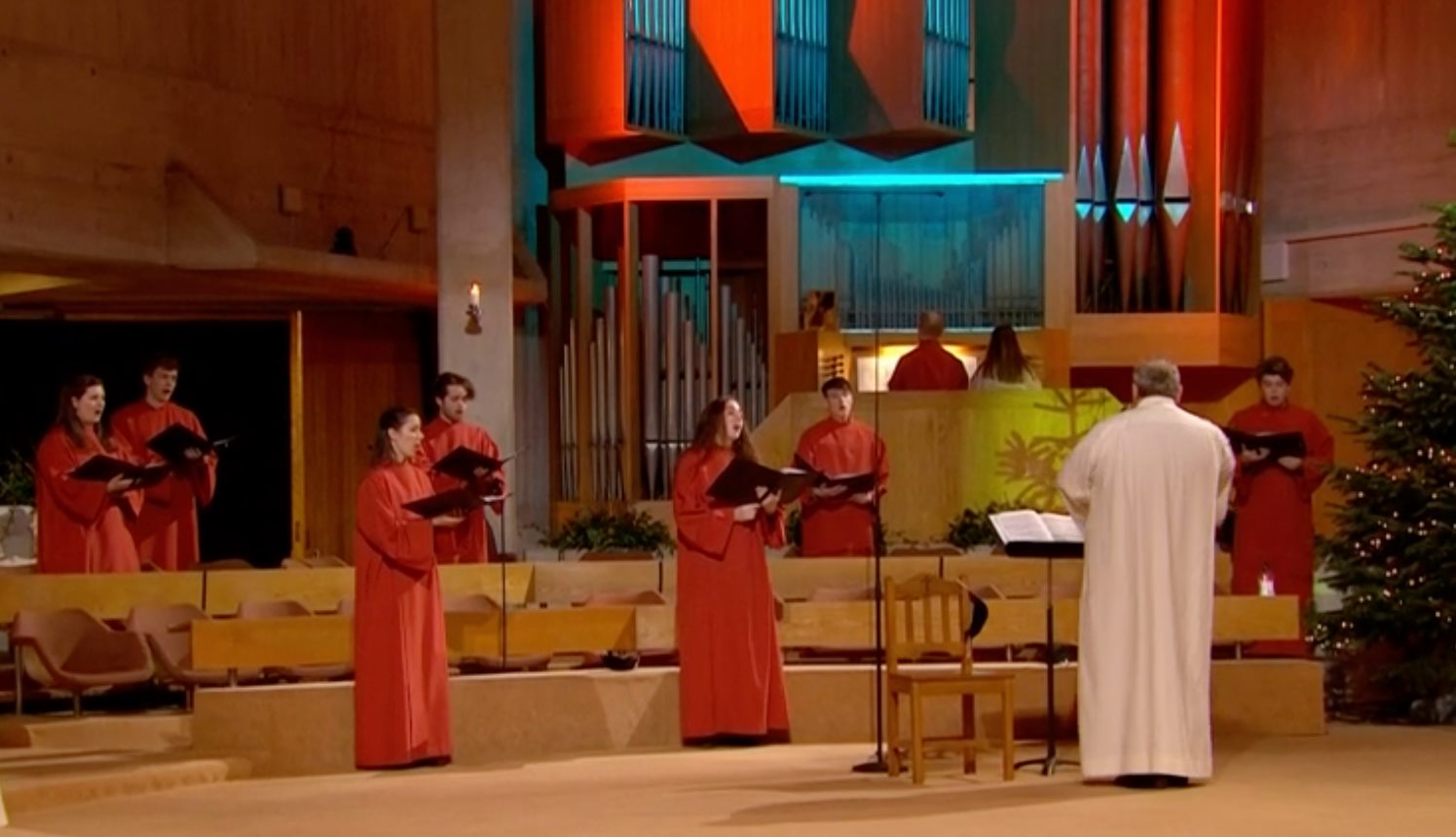 We are pleased to invite applications for new choir members in all voice parts. Scholarship and Exhibitioner positions available. 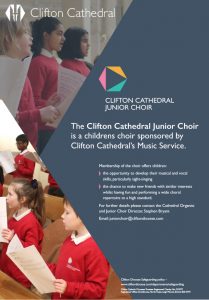 Membership of the choir offers children the opportunity to develop their musical and vocal skills, particularly sight-singing, and to make new friends with similar interests whilst having fun and performing a wide choral repertoire to a high standard.

As the Synodal Pathway of listening and discerning unfolds, we the bishops of England and Wales, are paying particular attention to the hopes and fears, the joys and anxieties of all who are sharing their thoughts and feelings with us. 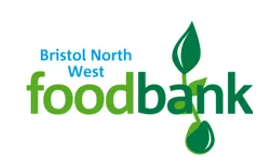 As we begin our season of Advent, the High Streets and online shops will have bustled with activity on “Black Friday”. But for some Black Friday is not about snapping up the latest deal, but thinking about how to put food on the table to feed a family; not a once a year, not every “Bleak Friday”, but every day of every week.

From March 2020, our Parish raised a magnificent £6000 to support the work of Bristol NW Foodbank as they provided food and other essential supplies for 3 times as many homes in need. As Christmas approaches, they will be sending out over 300 Christmas food parcels to individuals and families in crisis. If you can support their work, it would be very much appreciated. To make a donation go to https://www.justgiving.com/crowdfunding/bristolnwfoodbankchristmasappeal

WORLDWIDE SYNODAL PROCESS – The Church is listening!
Pope Francis has launched a worldwide process of listening and discerning, a ‘synodal pathway’, from October 2021 in preparation for the Synod in Rome in 2023.
This synodal pathway is a time of ‘journeying together’ and a time to reflect together.  We will begin by listening to one another and to the Holy Spirit who unites us all as the body of Christ, sharing our experience of travelling together in a time of profound change, intensified by the challenging time of the pandemic.  We will consider our wider experience, as members of the Church and alongside others in the world. It is hoped that every parish in the world will take part.  Our parish will participate with a series of listening events in January and February. All are invited and encouraged to take part. Further details of these events will be provided soon.
The parish delegates are Ann and Nick Tarr, Cath McCarthy, Appolinaire Etoundi, Wendy Allen and Paul Hill.

NEW MASS TIMES AT CLIFTON CATHEDRAL: Since Lent in 2020, the Bishops have eased the Sunday obligation to attend Mass. But as we venture out of restrictions we have our eyes focused on the First Sunday of Advent (28 November) as a point to pick up that ‘obligation’ once again.

A number of parishioners have been asking about the Mass times at Clifton Cathedral during the week and on Sundays and if we can rethink them now that Covid guidelines have been adjusted to be less restrictive. I am really grateful for some great suggestions and although it’s not possible to accommodate every wish, it is time to make some changes to our weekly schedule to coincide with the return to a little more ‘normality’. Weekday Mass Times The proposal is to vary the times of Mass on weekdays with the intention of making it possible for even more people to attend Mass during the week. We will establish a new schedule from Monday 29th November (Advent). Masses on Mondays, Fridays and Saturdays will remain at the current time of 9.30am, unless there is a Requiem Mass which may cause the time to change on a particular day. On Tuesdays there will be an evening Mass at 7.00pm, and on the other two weekdays (Wednesdays and Thursdays) Mass will return to the former time of 7.30am.

Sunday Mass Times Sunday Mass times will remain as they currently are: 9.30am, 11.15am and the 6.00pm.  I have been asked when we can return to offering an 8.00am Mass on Sundays, in order to provide this we will need some volunteers to commit to opening the Cathedral each week on Sunday morning a

ST JOSEPH”S HOME:  St Joseph’s  Home will be re-opening to the public for Mass from Monday 15th November at 10.30am daily and Sunday Mass 11am. Anyone attending will requested to provide proof that they have been fully vaccinated before they can enter the Chapel. All visitors must wear masks. Visiting residents will continue to be by appointment only.

All are welcome to join with a group ‘dreaming dreams’ about their faith, the life of the Parish and the life of the wider Church in the community of our world.  There are two opportunities to join in – on a Monday evening at 7pm in the Apostle Room or a Friday morning after mass in the James Room. Our next sessions are Monday 1st November and Friday 5th November, when we will be starting our thoughts with a consideration of what it means to be ‘Prophet, Priest and King’!

On the 8th/12th and 15th/19th we will begin to look at themes from Pope Francis encyclical ‘Fratelli Tutti’. You will be very welcome. For more details contact Wendy Allen on drwendyallen@gmail.com.​ 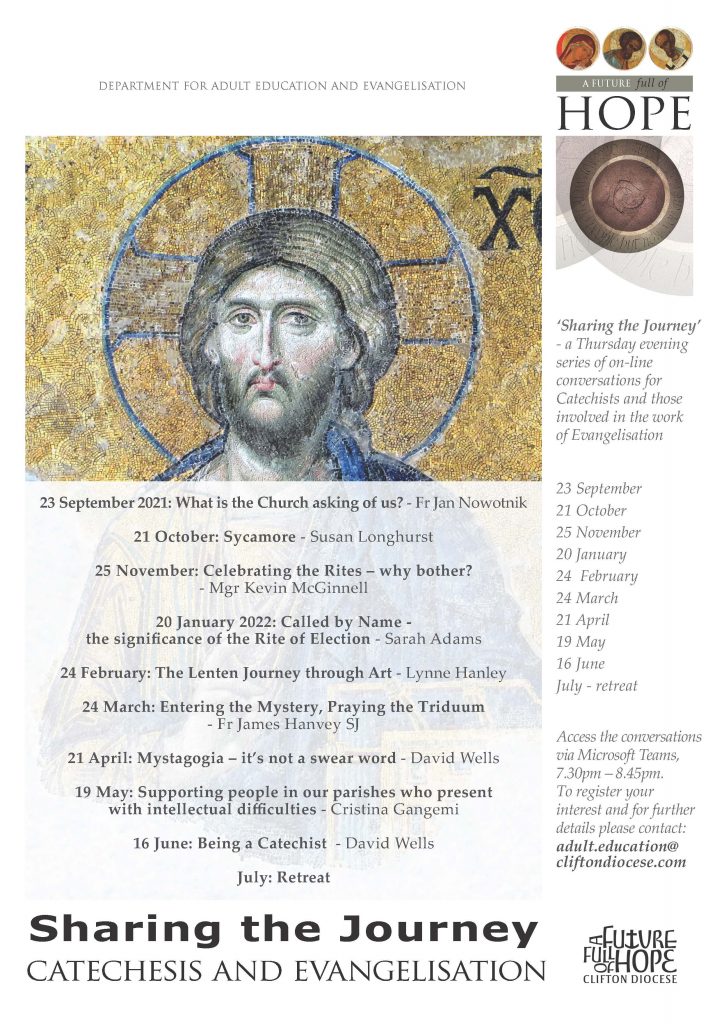 Diocesan Pilgrimage to the Holy Land 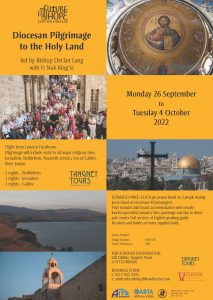 As many parishioners know, the retreat planned for september 2021 had to be cancelled because of the indisposition of Fr Denis McBride. Our next retreat will now be between 14-16 October 2022 at the Ammerdown Centre and will be led by Fr Nicholas King SJ. Fr Nicholas is a noted biblical scholar and has published his own translation of the New Testament, and is well-known to us as an inspiring speaker.

All those who had booked for the 2021 retreat will be automatically included in next year’s retreat unless they specifically withdraw from it. Places are limited so all those wishing to come on the retreat are advised to reserve a place as soon as possible. Further details and booking forms can be downloaded below or are available from the Cathedral Office or from Roger Bird at rogerbird1939@gmail.com​
Retreat Booking Form

St Joseph’s Home is currently looking to appoint a committed, motivated and enthusiastic part-time Admin/Accounts assistant and would welcome applications from candidates who have high organisation skills, “can-do” attitude and working experience of Financial software packages. If it sounds like you, please send your CV and a cover letter to Rev Mother Catherine at ms.bristol@lsplondon.co.uk